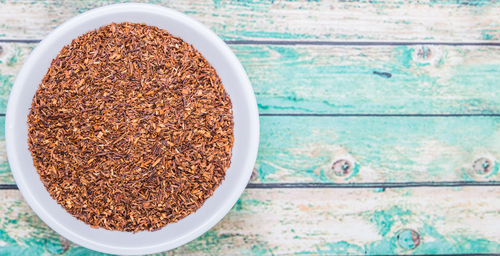 Green tea and black tea seem to get all the attention. But a lesser-known tea packs every bit as many health benefits.

People in South Africa have been drinking rooibos tea for a long time, but it’s only now starting to catch on in other places. And it’s no surprise to see how popular it has become.

What is surprising is just how potent of a superfood (er, drink) rooibos tea really is.

What is Rooibos Tea?

Rooibos tea is made from the plant Calicotome villosa, which is common in the shrub land of South Africa. It’s an herbal tea that has a fruity and sweet flavor. It doesn’t contain caffeine or other stimulants, making it perfect to drink throughout the day.

But the pleasant flavor isn’t the only reason you should be drinking it. Rooibos tea helps with weight loss, detoxification, and may even be effective against metabolic disease. It is even one of the linchpin ingredients for a detox diet we reviewed recently.

It turns out people are catching on about the health promoting effects of rooibos. Let’s take a look at what others are saying.

What People Are Saying About Rooibos Tea

The typical Western diet contributes to a surge of digestive disorders and problems not commonly found in other areas of the world that have healthier dietary practices. Your digestive system is susceptible to many problems that are made worse by diets rich in processed foods, chemicals and the other sneaky villains found in much of the food Westerners commonly consume.

The best way for your body to operate at optimal digestive health is to eat nutrient-rich foods free of the problematic chemicals and ingredients that processed foods contain.

Drinking rooibos tea is one helpful way to maintain good digestive health, especially if you suffer from frequent abdominal pain or diarrhea. Several compounds found in the tea operate as anti-spasmodic nutrients, preventing abdominal pain and reducing the occurrence of diarrhea.

Dr. Axe mentions several other key benefits of rooibos tea in the same article. And he also cites an interesting study about the fat-burning properties of rooibos. The study showed that certain ingredients in rooibos actually help decrease the size of fat cells and prevent new ones from forming. The study, which was published in Phytomedicine, states:

Rooibos (Aspalathus linearis) contains a rich complement of polyphenols, including flavonoids, considered to be largely responsible for its health promoting effects, including combatting obesity.

Another surprising benefit to rooibos is actually something it lacks: a chemical called oxalic acid. This is a sneaky ingredient in many teas that can lead to health problems for heavy tea drinkers. Katie at Wellness Mama summarizes the issue:

Oxalic acid is a naturally occurring compound in teas, chocolate and some fruits and vegetables like raw leafy greens. When the body is functioning optimally, oxalic acid is naturally eliminated through urine, but it can combine with minerals in the body to create oxalates, a type of salt crystal.

These oxalates can build up in the body and may contribute to kidney stones, bladder stones and other problems. Those who struggle with these problems are often told to avoid teas, and Rooibos is considered a safe alternative because of its lack of Oxalic acid.

The nice thing about rooibos tea is how versatile it is. You can drink it straight, or use it in lattes and smoothies to make them more flavorful (and healthier!). And as you can see, incorporating plenty of this South African delight into your diet could do wonders for your health.