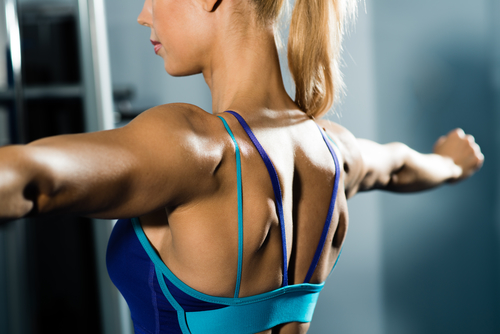 You don’t have to be in your athletic prime to be able to add muscle. Not even close.

Just take a look at Charles Eugster, who began bodybuilding at age 87(!). Not only that, he keeps breaking his own personal records even at age 95.

So “middle age” is a great time to start packing on lean muscle.

But building muscle in your 40’s, 50’s, or 60’s is not the same as when you were in your early 20’s. Your joints, hormones, and exercise capacity have changed.

These are things you should be aware of when you start hitting the gym again. Thankfully a lot has been written about this topic, so this post will highlight what some of the experts say.

In an interview with Bodybuilding.com, Charles Eugster (the 95-year-old body builder mentioned earlier) was asked whether an older adult should jump right in to a new workout regimen. His response:

No, no. It has to be done slowly. It has to start with functional training—exercises that carry over to activities of daily living, like balance and agility drills, stretching, swimming, and bodyweight exercises. I recently discovered that without supplements—especially without whey supplements—it just doesn’t work.

Another important thing occurs to me: the genetic makeup of people. According to Professor James A. Timmons, about 20 percent of people simply do not react to resistance exercise. A lot depends upon your genetic makeup. Therefore, I think it is extremely important for people to have genetic tests to determine what their nutrition should be and types of exercise they should perform.

It’s never a good idea to start intense exercise after a long period of inactivity. But this is especially true as you get older.

One of the common misconceptions about building muscle after 40 is that you won’t gain as much as a 22-year-old.

Turns out this isn’t true. As with lots of gym advice, people who say this are basing it all on anecdotal evidence.

Men’s Health addressed this in an article online by Christian Finn. He described actual research that disproves the myth:

With the right type of training, you can still build muscle and get strong well into your forties, fifties, and beyond

University of Oklahoma researchers compared people of different ages who followed the exact same program for eight weeks. They found that guys between 35 and 50 years old built just as much muscle as those between 18 and 22 years old.

You read that correctly: you can gain just as much muscle in middle age as you can when you’re in your early 20’s. Yet the myth still persists.

There’s no universally agreed upon rule about how intense your workouts should be.

Should you lift heavy? Or is it better to do high-rep, lower intensity workouts? And what about cardio?

It depends a lot on your starting point, and how experienced you are in the weight room. Nobody – no matter the age – should lift heavy (e.g. 1-3 reps at a very heavy weight) if they aren’t trained in the lift.

Lifting heavy still has lots of benefits as you get older, but we recommend working with a trainer if you choose to go that route. At least until you get comfortable with all the lifts so you can avoid injury.

A good starting out program (like this one) should use exercises that you’re probably familiar with already, and that have a low risk for injury.

What About Your Hormones?

It’s true that your hormones change as you get older. Even though this doesn’t mean you can’t build as much muscle, it’s good to know what those changes are.

Harvard Health wrote a piece about avoiding sarcopenia (losing muscle as you get older), and they addressed the hormone question:

One possible contributor to sarcopenia is the natural decline of testosterone, the hormone that stimulates protein synthesis and muscle growth. Think of testosterone as the fuel for your muscle-building fire.

Some research has shown that supplemental testosterone can add lean body mass—that is, muscle—in older men, but there can be adverse effects. Plus, the FDA has not approved these supplements specifically for increasing muscle mass in men.

Therefore, the best means to build muscle mass, no matter your age, is progressive resistance training (PRT), says Dr. Storer. With PRT, you gradually amp up your workout volume—weight, reps, and sets—as your strength and endurance improve.

This constant challenging builds muscle and keeps you away from plateaus where you stop making gains. (See “Working on a PRT program.”) In fact, a recent meta-analysis published in Medicine & Science in Sports & Exercise reviewed 49 studies of men ages 50 to 83 who did PRT and found that subjects averaged a 2.4-pound increase in lean body mass.

Keep in mind here that testosterone is important for both men and women. And the very act of lifting weights will help boost your testosterone levels.

If you’re already reasonably healthy, there’s probably no reason to reach for one of the many testosterone “booster” supplements marketed to older men.

You can still build muscle as you get older. The evidence is clear.

Be sure to take it slow, and avoid heavy lifting if you don’t know what you’re doing. But don’t let anybody tell you that you’re wasting your time, because the health benefits are very real.